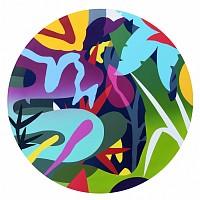 Neill Wright is a multidisciplinary artist based in Johannesburg, South Africa. His satirical work braves the world of social commentary in a bold, colourful and humorous manner. Wright explores various mediums, such as sculpture, printmaking and painting as modes of expression, drawing inspiration from the interconnected worlds of media, popular culture, politics and societal interactions in an attempt to create panoramic views of current issues, hardships, complexities and paradoxes present within South African and to some extent African society as a whole. Through highlighting the absurdities of a collectively experienced ‘everyday’, his work subverts the tragic, placing the viewer in a space where they are confronted by opposing feelings: the melancholic reality and the ironic hilarity of his compositions.

In 2007, Neill graduated with distinction for the degree of Bachelor of Arts in Fine Art (Honours), at the Michaelis School of Fine Art, University of Cape Town, where he was co-awarded the Simon Gerson Prize for an outstanding body of work.  In 2009, he graduated with a Postgraduate Diploma in Fine Art, majoring in printmaking. In 2013, Wright was named one of the ten emerging South African artists to watch by The Times, and he has exhibited in a number of group and solo shows as well as at numerous South African and International Art fairs. His works are housed in private collections in Europe, the United States, Australia and South Africa.

2013
The Hilarity of Reality, Circa on Jellicoe, Johannesburg, South Africa
Spectacular but Empty, The Lovell Gallery, Cape Town, South Africa