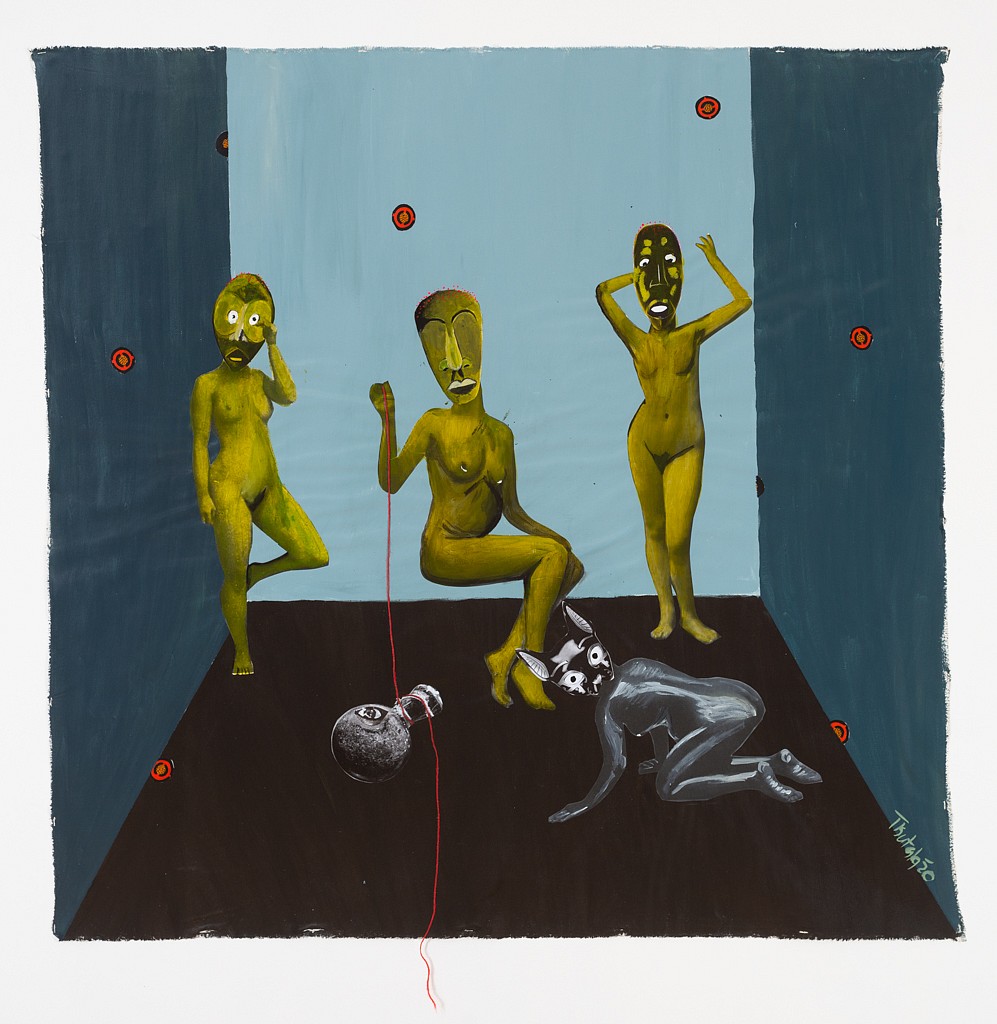 Kutala Firmino’s work embodies the artist’s efforts to grapple with trauma, both personal and collective, in everyday life. Many of her paintings are constructed scenes of the past and present, which are often intertwined.

The artist collects and curates textiles and images from magazines, newspapers, historical documents, and social media, and places them in colourful, contained stages. She creates surreal scenes in tightly confined interiors, where the characters are free to re-enact their stories or construct new ones. This process allows Kutala Firmino to consider alternate past, present and future narratives for Africa and its people, thus rebuilding her own archive of African history.

The artist’s own stories begin with the collective trauma of her birthplace, Pomfret, a border town in northern South Africa near Botswana and an atrophied community of former 32 Battalion* soldiers and their families, many of whom had Angolan heritage and were settled there at the end of the South African Border War.

Drawing on her own stories and experiences of the collective trauma of Pomfret, war, poverty and displacement, the act of making work is cathartic for Kutala Firmino. She believes “we heal by retelling our stories” and undertakes to tell “African narratives from an African perspective, as honestly as possible.”

Kutala Firmino is acutely sensitive to the fact that the history of the Pomfret population is recent, “so people who were affected are still alive. Some of these stories were hidden for a reason.” She instead interprets the stories as fairy tales, thereby transforming the narratives into something elevated and universal.

The artist’s seemingly playful and vibrant canvases are rich in symbolism and metaphor and explore the complex issues of identity and cultural heritage, gender violence and what it means to be a young Black woman in the 21st century.  In her paintings, Kutala Firmino creates a series of tableaux in which female forms, often with faces resembling (or hidden behind?) African masks, are the protagonists, and Kutala Firmino re-enacts their stories by imagining alternate realities that challenge the accepted version of historical events.

Masks are recurring motifs in Kutala Firmino’s work. Their function and power is activated by belief systems within African communities across the continent and the artist remains interested in how African objects and symbols have found their way into European contexts. Kutala Firmino talks of “an African deity opening its eyes in a museum in Belgium and realizing it is not home.” And she is interested in the dialogue between Africa and Europe regarding the restitution of objects that are sacred to a particular culture, thereby “reactivating these deities.”